The Worldwide Threat of Substandard Nets

Malaria is one of the world’s most deadly diseases. It kills 435,000 people a year, the majority are children under the age of 5. It is 100 percent preventable and treatable.

Some 663 million cases have been averted through diligent use of key interventions such as long-lasting insecticidal nets (LLINs), rapid diagnostic tests (RDTs) and indoor residual spraying (IRS). LLINs are on the front line of defense. Between 2000 and 2015 alone, 6.2 million deaths were averted. LLINs were responsible for saving 68 percent of those lives. However, we are not on track to achieve the 2020 milestones for reducing case incidence and mortality. Between 2015 and 2017, no significant gains were made in reducing the number of malaria cases worldwide. While many variables are responsible for the stalled progress, we identify three areas of significant concern.

The lack of clear and enforceable quality standards for LLINs threatens to slow the rate of progress towards eliminating malaria. In recent years, numerous reports have described quality issues with LLINs in Africa, regarding both their physical properties (wrong mesh size, knitting defects, imperfect seams and poor trimming) and chemical content (reduced pyrethroid content and poor wash resistance).

The only way to guarantee access to high-quality, efficacious LLINs is to establish universal quality standards, through a rigorous system of post-shipment inspection and routine in-country monitoring. We ask for new processes to assess and qualify LLINs based on in-country generated quality tests.

But even with new standards and increased inspections, pyrethroid-only LLINs are not equipped to address the dramatic rise in insecticide resistance. More than 68 countries report resistance to at least one of the four insecticide classes, leading to deep concern that pyrethroid-only LLINs can no longer offer the protection they once promised. Resistance poses a considerable threat to progress, which can, however, be mitigated by shifting to the next available technology before it is too late.

Vestergaard is addressing these crucial issues of quality and efficacy:

– First, we continue to manufacture LLINs according the highest quality standards, while calling for a coordinated global response to reports of substandard nets.

– Second, we lead the way in developing a new generation of nets that addresses the threat of insecticide resistance. PermaNet® 3.0 answers this need, with its dual action of piperonyl butoxide (PBO) and pyrethroid insecticide. 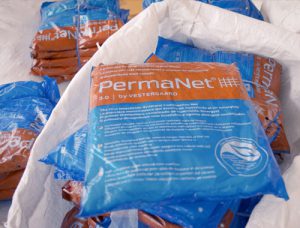 When the WHO issued its 2018 World Malaria Report announcing that progress in the fight against malaria had stalled, the organization’s Director-General, Dr. Tedros Adhanom Ghebreyesus, said: “An alarm bell is ringing around the world.”

Vestergaard is responding to that alarm by accelerating the production and deployment of PermaNet® 3.0.

We need all hands on deck to ensure we achieve our common 2030 objective of reducing malaria incidence and mortality rates by at least 90%. This includes relying on innovative commercial partners, who are willing to invest in the next generation of high-quality tools.

When the goal is clear to all partners, responsible businesses will develop solutions that can work for all.

GETTING BACK ON TRACK (PDF)