We developed the SmartNet Initiative as an engagement program to gather critical feedback from our PermaNet® users while also providing information on how they can protect themselves from malaria. Through enhancing engagement with malaria net users, we can utilize data-driven engagement to stop malaria.

As the world grapples with challenging humanitarian crises ranging from disease to poverty to natural disasters, the collection and use of data have never been more important. Governments, nonprofits, and private-sector companies are working together to develop accurate and informative data. These data can be used to identify new market innovations, to ensure accountability, to improve health and to save lives.

As an early innovator of the Long-Lasting Insecticidal Net (LLINs), Vestergaard protects lives through the distribution of more than 50 million of its PermaNet®s annually. PermaNet®s reach an estimated 30 million households worldwide per year, assuming an average of 1-2 nets per household. While LLINs are credited with the largest success in preventing malaria, we know stopping here is not enough.  In order to defeat malaria, we have to continue innovating tools adaptable to this constantly evolving disease.

This is why we’ve developed the SmartNet Initiative.

The SmartNet Initiative is a unique engagement program that gathers critical feedback from our PermaNet® users in the community while also informing on how to protect themselves from malaria. We believe this type of community data-driven engagement will be instrumental in eradicating malaria. Through our SmartNet Initiative, we can maximize usage and success by engaging with the end-user in helping to prevent malaria at the household and community level.

Research shows that 79 percent of the world’s population will have a smartphone by 2025 and 97 percent will be using a 3G connection or higher. Particularly in sub-Saharan Africa where the malaria burden is greatest, this is a tremendous increase in mobile technology and the internet. This provides an unprecedented opportunity to establish a two-way dialogue with net users and use data-driven engagement to stop malaria. (Source: GSMA Mobile Economy Report 2018).

We conducted two early field tests in Kenya to understand the potential impact of our SmartNet Initiative. The first study in 2018 involved the door-to-door distribution of 300 PermaNet®s in six counties. Printed instructions on the outside of the PermaNet® package asked users to use a short code to access a USSD survey consisting of 10 simple questions about their family’s net usage and malaria cases. All respondents in the 2018 survey, received a follow-up call after 90 days to reinforce the connection. In 2019, another 10,000 were distributed through health clinics in Kakamega that had printed call-in instructions in the package. 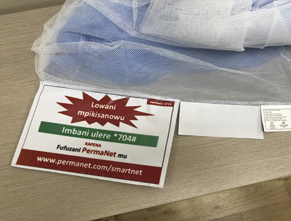 Household distribution yields ranged from 60-90 percent of people responding to the survey depending on incentives. Response rate after 90 days were between 34 to 44 percent, illustrating that a durable connection with end users can be achieved even after a period of silence. The routine LLIN clinic distribution of 10,000 nets to women attending antenatal clinics had instructions inside the package and yet yielded a smaller, significant response rate of 10 to 15 percent.

Given these promising but preliminary results, we’re currently piloting the SmartNet Initiative via a first large scale PermaNet®3.0 distribution in Malawi in partnership with the United States President’s Malaria Initiative (PMI) and the National Malaria Control Program. As part of the routine distribution of 300,000 LLINs, we are providing the option of using a 2G mobile phone or a smartphone mobile app to complete the SmartNet Initiative survey. Results are expected within six months.

Real-time, accurate information is desperately needed in the fight to #Endmalaria. By connecting directly with users, Vestergaard is gathering precise details about net usage, as well as critical insights into PermaNet®s. The mobile technology maps the users’ responses in real-time, helping people to better “see” what is happening around them with the goal of prevention, and where warranted, seeking health care services.

However, collecting and analyzing this type of information through traditional field survey methods takes months, if not years, and is expensive. By partnering with Dure Technologies, a firm with proven experience in creating software solutions to national disease control programs, we are developing and testing a mobile tech solution. This will enable access to real-time citizen-sourced data for the community, the national program, donors and other people engaged in the fight to #Endmalaria.